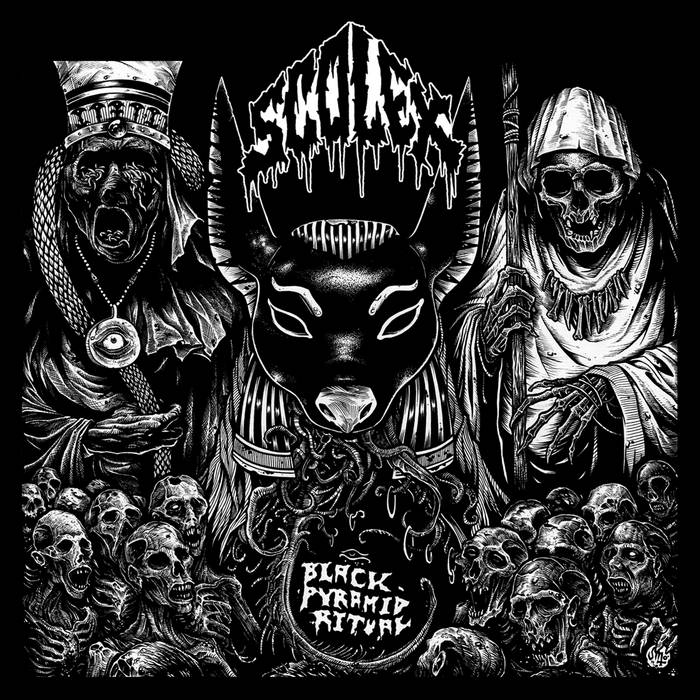 "Black Pyramid Ritual" was originally recorded in 2012 by Salvador Raya at Earhammer Studios. After deciding to use the song for a split 7" with Bay Area death dealers MORTUOUS years later, Justin re-recorded the guitar tracks with Greg Wilkinson at Earhammer Studios in 2017. Wilkinson also mixed the track and it was mastered by Dan Randall at Mammoth Sound Mastering. Carbonized Records released the split October 31, 2018.

Eternal descent through inviolate night
Through hours of fear and charts read by torchlight
Burial chamber rites are now intoned
And ring in the silence under miles of stone...

Circle inscribed, trace the final mark
My legs collapse, my vision goes dark
Pulled through the sands of the black hourglass
The skull-dust of eons sifts through my grasp

The rivers run steaming with pitch
Elder spell from stygian deep
"And it shall lead forth the stiff legions of the dead
from the sunken houses of sleep..."

The chambers echo their lonesome cries...

The shadows gather at the door
What gods will be when mankind is no more?

Formed in Oakland, CA in 2010 by drummer/vocalist Justin Green and bassist/vocalist Erika Osterhout. Handling guitar duties themselves w/ guest solos by Danny Corralles of AUTOPSY, the duo recorded four tracks in 2011 and released “Torn From Beyond” as a 12″ mini-LP on Osterhout’s own label Lunar Tomb Records. In 2018, Carbonized records released the "Black Pyramid Ritual" split with Mortuous. ... more

Bandcamp Daily  your guide to the world of Bandcamp